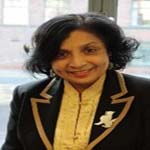 Smith, Nima-Poovaya is Director of Alchemy, a cultural enterprise company whose central concern is the development of ideas into creative product with a particular interest in the exploration of the confluences of different cultures and disciplines. She is Director of Connect: People, Place and Imagination – Cartwright Hall Art Gallery Collections. Nima is also Project Director of Pillars of Light, a year-long, region-wide programme of events exploring different aspects of Muslim cultures and heritage.

Nima was Head of Special Projects at the National Museum of Photography, Film & Television, Bradford until April 2004. Previously, as Director of Arts at Yorkshire Arts (now Arts Council, Yorkshire) she project directed the extremely successful Year of the Artist campaign for Yorkshire and the Humber region in 2000 – 01. As Senior Keeper, International Arts at Bradford Art Galleries and Museums from 1986 -1997 she curated a number of nationally acclaimed historical and contemporary exhibitions relating to themes as varied as Women Artists of Pakistan and 101 Saris from India. She also set up the Transcultural Gallery, which houses the permanent international collections of Cartwright Hall. She has written and lectured extensively on the arts.