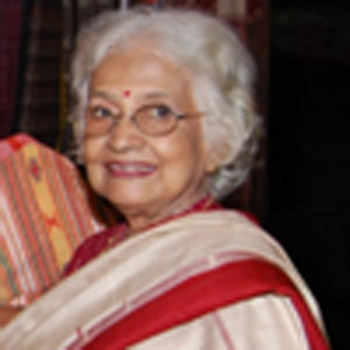 Ruby Palchoudhuri is one of India’s leading experts and voices on craft revival and documentation. She is currently the advisor and President Emeritus of Crafts Council of West Bengal. She was earlier elected as Honorary General Secretary and Executive Director, Crafts Council of West Bengal (affiliated to Crafts Council of India (CCI) and World Crafts Council (WCC), a voluntary non-profit making organization, established to revive dying craft and to promote cultural thoughts and purpose amongst connoisseurs, craftsmen and organisations interested in crafts.
She was elected as Vice-President of Crafts Council of India.She has been Felicitated by FICCI Ladies Organisation, Kolkata Chapter for Outstanding Contribution in the Field of Revival of Craft.
Set-up various Training-cum-production Centres in Kolkata and Santiniketan as part of the income generation programme for lower income group while focusing on the revival of various craft forms. Palchoudhuri is the author and editor to numerous publications on crafts. She has curated exhibitions in different Museums and spaces across the world.