Some Thoughts on the Future of Tradition

Kak, Dr. Krishen K
KEYWORDS YOUR VIEWS
"Tradition" can be interpreted variously, according to whether one's perspective is, for example, literary, political, sociological, or historical.  Which interpretation should we consider?  Obviously, for us, that which is considered relevant by the sponsor of this conference.  Well, how does the sponsor interpret "tradition" and "traditional textiles" and "traditional artisans", all of which labels feature in the background paper circulated by it.  According to the sponsor, "specific geographical regions in India have age long tradition associated with fabric production. This is in terms of different fibre groups, cotton silk and wool and different manufacturing processes, spinning, weaving, dyeing and printing. With changing time the production centres have also evolved and developed their own grammer in terms of colour, design and ornamentation and their usage for specific products. A large number of such centres continue to be important in the social and economic life not only for the production of items associated with religious and social rites, but also in their effort to make a statement which fits into the contemporary usage. According to the [sponsor] these issues are relevant to traditions".(1) I make bold to suggest this grammar-centred interpretation is insufficient and, from a crafts manufacturing perspective ("manufacture" is literally "made by hand"), I would like to propose a semantics centred interpretation as being of greater concern to the theme of this conference. From the sponsor's interpretation and the theme of this conference, it appears "... 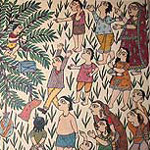