Planning For Crafts: The Indian Experience Of Fifty Years

Chatterjee, Ashoke
KEYWORDS YOUR VIEWS
Soon after Independence in 1947, India incorporated handicraft and handloom production as important elements in  ts new development objectives. The Industrial Resolution of 1948 recognized the need to protect cottage and small-scale production against competition from mass manufacture. The First Five-Year Plan reserved certain spheres of production exclusively for hand industries. A network of support organizations for the sector was created in the 1950s, each offering numerous schemes of assistance. The network included the Khadi and Village Industries Commission (KVIC), the All India Handlooms and Handicrafts Board (AIHHB), the Offices of the Development Commissioners for Handlooms and Handicrafts, the Central Silk Board, and the Coir Board. At a time when rapid industrialization was the overwhelming preoccupation, these measures reflected a commitment to hand production that had motivated the movement toward Independence, drawing its inspiration from the Indian renaissance. The khadi revolution, innovated as resistance against colonial rule, became one of the great chapters of the freedom struggle. Mahatma Gandhi’s emphasis on self-sufficient village communities, symbolized by the spinning wheel and khadi production, inspired a central position for crafts in free India, as part of its search for identity and confidence within change and transition. Definition: Half Full or Half Empty? Fifty years of planned development has seen an enormous resurgence in craft awareness, a booming craft trade (estimated at Rs60,000 crores annually), craft retail chains in th... 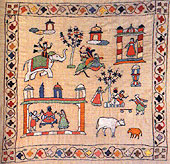