Economic Impact of Artisans and Their Crafts: An Up-Date

Chatterjee, Ashoke
KEYWORDS YOUR VIEWS
When enumerators from the national Economic Census 2012 knock on your door later this year,  give them a special welcome. Census 2012 is going to be hugely significant for CCI and all crafts activist in the country --- and you may well be part of the preparation the enumerators will have gone through in order to do their job. That job is linked to CCI’s “Craft Economics & Impact Study” (CIES) which was completed last year (see Learning Together, Newsletter February 2012). The February Newsletter attempted to keep members informed of developments that have followed the submission of the CEIS to Government, soon after the Study was shared at the Business Meet last August. The Study and its recommendations were then reviewed by a partnership group which came together at the Crafts Museum in New Delhi in September. That was when members of the CEIS team (Raghav Rajagopalan, Gita Ram, Manju Nirula, Shikha Mukherji and I) met with key officials in the Planning Commission and at the Office of the Development Commissioner. CEIS had an impact. Early in March, the Commission called a series of meetings bringing together activists from civil society and a range of Ministries and Departments at the Centre who are (or should be!) concerned with the wellbeing of artisans and their crafts. Those discussions on the CEIS and related experience have proved hugely significant. The CEIS premise (which echoed concerns expressed earlier in discussions with stakeholders leading up to the 12th Five-Year Plan) was accepted that national data currently available on the sector is... 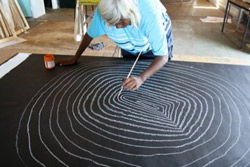