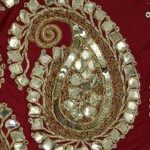 Sethi, Ritu
KEYWORDS YOUR VIEWS
In the kaarkhanas or workshops in Udaipurin the Mewar region of Rajasthan a unique and unusual form of glittering ornamentation called Danke-ka-Kaam is embroidered on to textiles. Danka are small gold and silver square metal faceted discs, not larger than 1.5 centimeters that have been hand-beaten to form a facet that glints and reflects light akin to a diamond. Stencils are used to transfer the motifs including paisleys, flora, peacocks, betel leaves, vines, geometrics and scrolls as metallic zari yarns are worked in the zardozi technique around the faceted danka couched on to sumptuous and brightly colouredsilks, satins and velvet with the help of several needles, from sewing needles to the hooked needle locally known as ari. The danka lies at the heart of the opulent embroidered ceremonial poshaksworn by Mewari Rajput women at weddings and festive rituals. This traditional garment comprises of a kanchali (blouse) ghagara (full length) gathered skirt and odhna (head) mantle. In the last few decades danka has also been embroidered onto saris and other garments. Danke-ka-Kaam remains relatively unknown outside its own geography. The Danka kaarkhanas are mainly located in the colloquially named Boharwadi or colony of the Bohras where the making of the danka pieces and its embroidery are practiced by the small Bohra Muslim community who migrated to this area in the 16th century and continue their traditional practice today. SaifuddinZariwala is the seni... 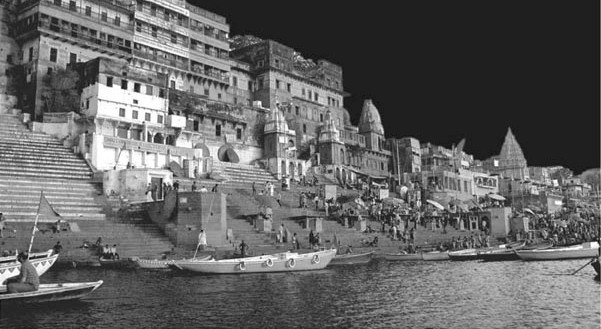 Conurbation of Zari Craftsmen at Varanasi