An Outsiders Perspective on the Inside Deal: Seva Mandir, Udaipur, Rajasthan and India

Introduction: Who I am & What I’m Doing

I came to India to learn about how the country, culture and currency of my birth are changing the rest of the world. I came to India to discover how a country three thousand years in the making could be loosing its traditional heritage to modern market forces and factory-made goods. I came to India to immerse myself in the ever evolving world of Indian arts and crafts and examine their makers’ statuses. When I applied for my Fulbright grant, now almost two years ago, I had in mind a project full of hope, of homegrown resistance to westernization; full of promise for a better life for the rural artisan with the increase of technology through rural development programs. Instead I found a few brave organizations that are working relentlessly against the odds to provide both increased income and/or cultural preservation. Among the most well known of these organizations is Seva Mandir and its craft/income generation program, Sadhna. So after spending half a year doing research on various Indian folk crafts and craft development programs in the bustling city of New Delhi, I set out for the much smaller and less hectic city of Udaipur, located in Southern Rajasthan. I was to spend the next two weeks working as a volunteer for Sadhna and discovering what goes on behind the scenes at a typical development NGO.

Background Check: What Seva Mandir and Sadhna Really Do

Dr. Mohan Singh Mehta began Seva Mandir in 1966 in an attempt to raise awareness about the “particu... 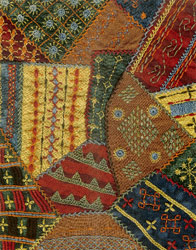 From the Heart of Karnataka’s Dusty Iron ...

The Spirit of Craft